To boost tourism in southern Mexico, President-elect Andrés Manuel López Obrador has proposed investing between 120 and 150 billion pesos in a train that will integrate the Mayan region.

Part of this vision connects Tabasco, Chiapas, Campeche, Yucatan and Quintana Roo through a modern train system that would link the main archaeological centers of the Mayan culture in Mexico. The project launches this December and could take up to 4 years to complete.

The Routes of the Mayan Train
The trans-peninsular tourist train project includes beach destinations and archaeological sites in Southeastern Mexico. Here are some of its destinations:

Cancun-Quintana Roo
Besides its beaches, this region includes attractions such as the Mayan Museum of Cancun, which houses a collection from the archaeological sites of the State and others from the Mayan culture.

Calakmul (Campeche)
This area is known for its archaeological sites, like the ruins of Becán and the nature reserve.

The archaeological site of Panhalé is one of its greatest attractions. The area is also popular for its activities related to ecotourism.

Bacalar (Quintana Roo)
In addition to its beaches, this stop is the home of the fort of San Felipe de Bacalar, built in 1725 to defend the area.

Felipe Carrillo Puerto (Quintana Roo)
Is home to the Sian Ka’an Reserve which was declared a World Heritage Site by Unesco in 1987.

Tulum (Quintana Roo)
The area of Tulum has several cenotes where one can swim or visit the ruins that are located next to the beach.

Playa del Carmen (Quintana Roo)
There are several parks in this area that offer a cultural and ecological experience for visitors.

Valladolid (Yucatán)
This city is rich with architectural relics. It houses several churches and convents located in the center and has several cenotes in its surroundings.

Izamal (Yucatán)
Izamal was named a Magical Town in 2001. One of its greatest attractions is the convent of San Antonio de Padua.

Candelaria (Campeche)
El Tigre archaeological zone of Candelaria,  is believed to be the place where Hernán Cortés murdered Cuauhtémoc.

Balancán (Tabasco)
In this region, the ecological reserve of the Cascadas de Reforma, is a protected area located next to the Moral archaeological zone.

Three sections of the route are currently being contemplated: the forest, covering approximately 426 kilometers; the Caribbean including 446 kilometers, and the Gulf, which will cover 653 kilometers. 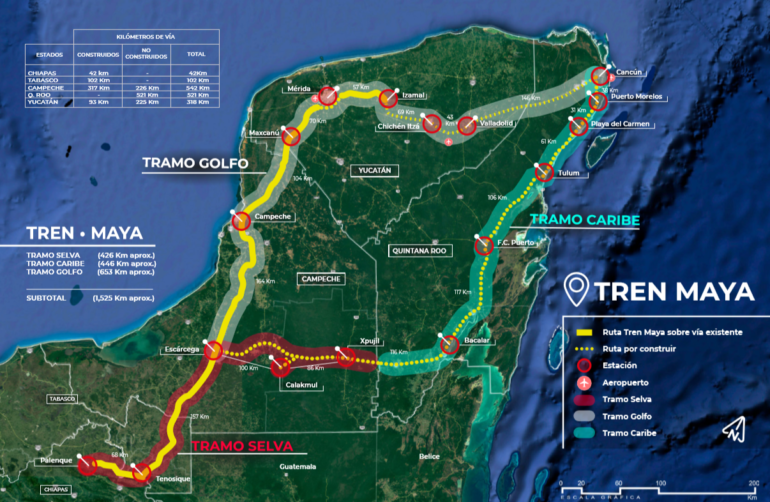 The Mayan Train will integrate key regions of Mexico rich with archaeological history. In its trajectory, it will trace the second largest ecological reserve in the American continent and promote the economy, tourism, and development of Mexico within respect for the environment.

The zone covered by the Mayan Train will travel through areas with a history of high marginalization. Advocates of the Mayan Train anticipate the ambitious project as a positive economic trigger that will benefit neglected towns and generate employment and tourism.

Lopez Obrador envisions the train as a source of community integration, a hailing of a rich archeological and natural environment and a powerful technology that will showcase the splendor of the Mayan culture. The president-elect hopes to strike a balance between quality tourism and the integration of neglected social groups.

López Obrador estimates an investment of 120 to 150 billion pesos made up of public and private contributions:

“It is a project that we consider indispensable and strategic for the nation, it is not a project of the federal government or the governors, it is a project for the Republic, and of our nation because it involves citizens, civil society, the private sector and the authorities of the three levels of government,” he said.

The president-elect said that the investment will be mixed and that foreign companies will be invited to invest:

“There is great interest from other countries for Mexico to do well and to increase our economic growth,” although he assured that national investments will be given priority. Talks and consultations with the indigenous peoples from the communities where the train will cross are already underway.

Benefits
Rogelio Jiménez Pons, will be the next director of the National Fund for Tourism Promotion (FONATUR) and also the person in charge of coordinating the construction of the Mayan Train. The expected benefits include the following:

This incredible project sheds light on a historical and environmentally wonderous Mexico. We wish the people of Mexico all the best. In a few years, we hope to travel aboard the Mayan train to revisit histories and connect with sites the Mayan ancestors left behind. 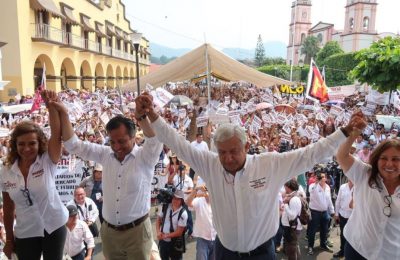 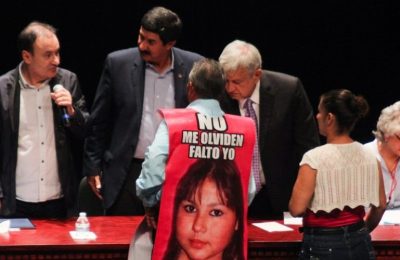