The pursuit of The American Dream has propelled Central American migrant caravans on a perilous journey to the U.S. border. Once in Tijuana, members of the caravan face endless waiting periods to meet with immigration agents of the United States. After sleeping in the streets, staying in overcrowded shelters and running out of resources and hope, some migrants are rethinking their plans and embracing a new possibility: to pursue The Mexican Dream.

Angel Lemus, a Honduran migrant who arrived in Tijuana with the migrant caravan, opted to leave a shelter in Tijuana and get to work.

Angel does not care that his wages are low. “Little by little, I am building my Mexican Dream.”

Like Angel, Nelson Davila,  also decided to work rather than wait to meet with US authorities:

“Instead of waiting for handouts at a shelter, why not help ourselves?” Nelson told Telemundo.

Karen Avila is their boss. As the business manager running the Auto Wash Center she has benefited from Honduran labor.  Karen hired Nelson and Angel immediately. She said she did not ask for visas or work permits because she wants to extend solidarity to the migrants who have gone through so much:

“They are excellent workers, hardworking, honest and respectful.”

So far, 70 migrants have found work here in Tijuana, confirmed Issa Isorio, a Telemundo reporter. Other migrants have moved south towards Rosarito where work is also available in the restaurant and building industries.

A restaurant in Rosarito hired Omar Bron  as a handyman. The same establishment hired Javier Helmet as a kitchen helper:

“Here, they give us our daily food, a roof over our heads and work.”

In Tijuana, approximately 2500 migrants have stayed in the El Barretal shelter. Several have opted to return to their countries of origin, and  many are choosing to stay in Mexico and rebuild their lives on Azteca soil.

The migrant caravan that undertook a marathon exodus from Honduras in search of the American dream brings with it a valuable workforce for the Mexican city of Tijuana. Among those who have decided to work in Mexico, are bricklayers, cooks, painters, and seamstresses.

Under a white tent placed near their overcrowded shelter hundreds of migrants line up daily to participate in an employment fair organized expressly for the thousands of members of the caravan.

In this space, companies gather to offer their vacancies and to interview the migrants. Immigration authorities and agents of the Mexican Refugee Aid Commission are also present to regularize their stay and to give them access to social security benefits.

While they wait for their immigration status to be defined, many will be awarded humanitarian visas and a work permit.

Wilman Correa, a 27-year-old Honduran studied to become a teacher but was never able to work because of the lack of opportunities and violence in his country. Now in Tijuana, he is willing to take any job within the Mexican-American border industry.

Like many border cities, the great engine of the economy in Tijuana is the manufacturing industry, especially in the aerospace, medical and electronic sectors. To the south, are the beaches of Baja California – the state to which Tijuana belongs – where restaurants and hotels cater to international tourism. With bilateral trade amounting to more than US $ 500 billion annually, Mexico sends more than 80% of its exports to the United States, its main trading partner.

Industrial leaders state they have plenty of jobs for migrants: “We are offering between 7 thousand and 10 thousand jobs in the industry sector and in other growing industries, such as restaurants,” said Salvador Diaz, president of the local Association of Industrialists. “Everyone wins in this business: migrants get legal employment and employers earn tax-deductible labor,” he explained.

For 1,800 pesos a week (about US $ 90), Cesar Elvir hopes to be hired as a painter in a factory. The 20-year-old Honduran who is traveling with his wife and two children has already passed the first rounds of interviews and expects the company to confirm his place.

“It looks good so far. My goal was not to stay in Tijuana, but while I waited for my other opportunities, this became the best option.”

The vast majority of migrants are families with good intentions. “Some have volunteered to identify criminals to the Mexican authorities,” reported the Guatemalan Press, Prensa Libre.

Tijuana could use migrant labor, reports the local press, El Sol de Tijuana. There is a great need for migrant labor in the industry of Deitac, a hub for manufacturing solutions in Tijuana for aerospace and medical industries.

Carlos Higuera, the director of Deitac explained the impact of the caravan on Tijuana resources:

“Nearly ten thousand people arrived in a range of a month and a half. Our city can accommodate to this migration flow without problem, as long as it is well-coordinated. We faced immediate challenges when large numbers of people arrived all at once. The city of Tijuana has a growing need for labor. With the arrival of new foreign investment and new companies, more hands are needed today to fill jobs in new industries,” he said.

On Friday morning, the second shelter began operating to provide assistance to migrants who had been staying overnight on Calle 5 de Mayo, next to the Benito Juárez sports unit, in the downtown area of ??the city.

The winery, located half a block from the sports center, has an area of ??3,800 square meters and will accommodate 600 migrants, including men, women and children, said Celeo Archaga, Honduran pastor who arrived with the migrant caravan.

In this new space, migrants will have access to basic services and will be able to stay indoors which will help weather the low temperatures and extreme conditions characteristic of this winter season.

“In Honduras I took care of babies and I cleaned houses,” said Karla Vallecío, 34, after filling out an application for a job. “If I find work, the first thing I will do is get a little room and stay here in Tijuana. The legal process to ask for asylum in the United States is slower and more cumbersome than any of us could have imagined.” 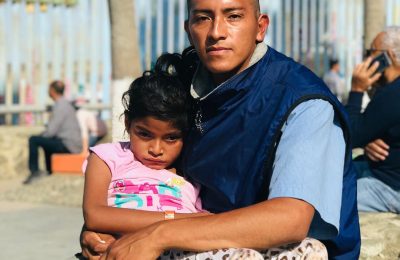 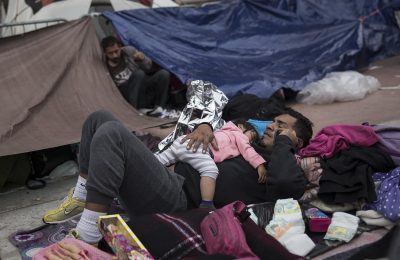