Growing Pains – Mexico launches 100 Universities with and without Infrastructure 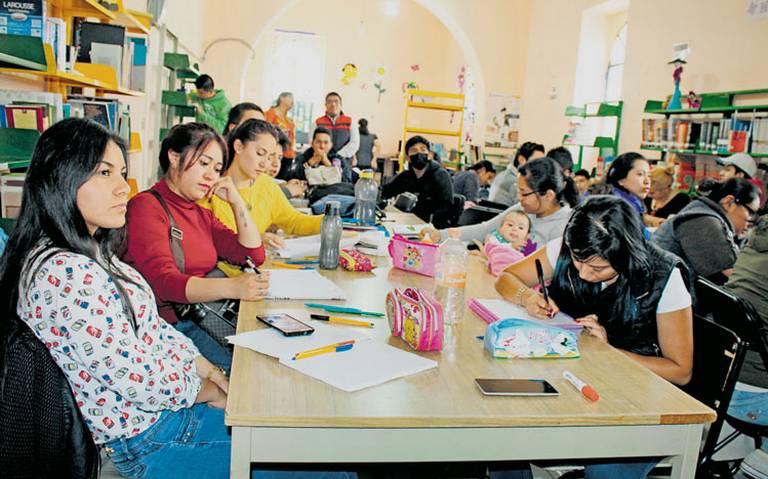 In Xaltocan, 41 students take university courses inside a city library. They are awaiting the building of their own university, currently in progress but without access to restrooms. Photo Courtesy, El Sol de Tijuana.

Under the initiative of Mexico’s new president, Andrés Manuel López Obrador, an ambitious university policy (Universidad para el Bienestar, Benito Juarez Garcia)  has set out to provide university access to 300,000 Mexican students. To achieve the challenging goal, the policy launched the creation of 100 universities in only 5 months. The measure came in effect to widen university access in Mexico, a nation where only 2 out of 10 young people have access to the university, according to OECD data.

However, growth has preceded planning, argue the policy’s critics. Opponents of the fast change state that infrastructure is unready. There are no buildings to hold classes and some classes are taking place in crowded, small spaces with curricula designed in record time, teachers elected without a proper search or adequate training.

Some argue that new hires do not hold official accreditation from the Ministry of Public Education (SEP).

With or without infrastructure, and despite critiques, classes at the Benito Juarez Universities backed by the current federal administration are under way.

While most facilities are not operating comfortably, yet, the plan is to have each campus eventually host its own library, computer room, classrooms, dining rooms, labs and spaces to produce renewable energies.

The new constructions aim to be thermal, anti-seismic and with a built-in, risk-prevention system. Each university is to be designed and erected within the character of its locale and through the use of local materials, within respect of the community’s heritage.

Several Mexican states have not allocated resources for their constructions, but have decided to move forward with the start of classes.  This includes, Queretaro, where students who will attend the university in Ezequiel Montes to study community medicine are currently taking courses in the Casa de la Cultura, a property donated by the municipal council as an interim learning space.

In Hidalgo, new university students in El Mexe, are also taking classes in improvised classrooms. The University of Chilcuautla, as well as the Huasca University currently operate from the Geoparque while students wait for their own university to pursue degrees in Agrifood Engineering.

In the State of Mexico, three universities await to be built: Villa del Carbon, Villa de Allende and Texcoco. No start date has been set at the moment. Leaders are awaiting a budget, details of the projects and  specifics on locations.

In Zacatecas, the situation is similar. Three universities are set to launch. One of them is currently operating out of the municipality of Panfilo Natera in the Casa de Cultura where classes are taught in Agri-Food Engineering.

On June 10th, registration for new students is set to begin.

Aguascalientes is also awaiting infrastructure, as 240 student pioneers await a home school. One hundred-twenty students are studying Agro-Industrial Engineering in Asientos, and another 120 students study environmental engineering in Calvillo. Borrowed spaces and makeshift classrooms can also be found in the universities in Tlaxcala.

Raquel Sosa Elizaga, the coordinator for universities systems project reported that 83 venues are currently operating and 18 are still pending throughout Mexico.

In a forum, Sosa thanked the communities for the donation of lands and premises that has allowed for instruction to begin. Sosa reported that there are already 459 teachers on campuses, 7575 students registered and six concentration areas with 36 career paths being offered to the next generation. To support their studies, students are receiving a monthly scholarship of 2,400 pesos ( $125 dollars per month).

For his part, Andres Manuel Lopez Obrador concedes that this an ambitious project that will continue to diversify and grow with funds and time. The government of Mexico has set aside approximately 52 million dollars for the Universidades para el Bienestar project. His vision includes the permanent building of university structures, built by neighbors and in lands donated by campesinos or municipal authorities.

“Part of what motivates the university expansion project is the reduction of criminal activity in Mexico. It is a thousand times better to have our youth studying and working than roaming the streets,” defends Andres Manuel Lopez Obrador.