On May 26, 2020, at 12:01 am, Costa Rica celebrated the first legal, same-sex marriage in the country’s history. Daritza Araya-Arguedas and Alexandra Quiros-Castillo were legally wed in a ceremony in Heredia, Costa Rica that was broadcasted online and on television throughout the nation, due to social distancing procedures. Many people around the nation tuned in to the virtual celebration, including eminent Costa Rican musicians such as Monica Naranjo, Lila Downs, and Manuel Obregón. Also among the renowned individuals featured on the broadcast was the United Nations High Commissioner for Human Rights, Michelle Bachelet, who championed the marriage as a victory for human rights.

This landmark marriage was the culmination of over 40 years of gradual victories for the LGBTQ community. For example, in 1971, Costa Rica legalized same-sex sexual relations, whereas prior to that year they were a punitive offense. About thirty years later, in 1999, Costa Rica passed an HIV/AIDS Laws that proscribed discrimination on the basis of sexual orientation. Next, Costa Rica legally recognized same-sex domestic partnerships in 2013.

Translation: Costa Rica officially recognizes equal marriage. Today, we celebrate liberty, equality, and democracy. Empathy and love are the compass that allows us to move forward and construct a country in which everyone feels like they belong.

The most significant advance for LGBTQ rights in the nation was when Costa Rica appealed to the Inter-American Court of Human Rights in 2016. In the appeal, Costa Rica asked the court to make a ruling on the legalization of same-sex marriage in the country. Two years later, in August of 2018, the Constitutional Chamber of the organization’s Supreme Court of Justice resolved that preventing gay marriage was unconstitutional and mandated that the universal right to marriage be outlined in legislation within eighteen months. Not only did the IACHR give these instructions to Costa Rica, but it recommended that all signatories of the American Convention of Human Rights follow suit. However, Costa Rica has been the only one of the Central American signatories to implement the necessary legislation.

Although couples like Araya-Arguedas and Quiros-Castillo can be happily, and legally, married, there is a particular Costa Rican couple that is unsure of the fate of their marriage. In 2015, Jazmín Elizondo and Laura Flores-Estrada obtained a marriage license by going through a prominent LGBTQ activist and lawyer in the country, Marco Castillo. When creating the marriage license, Castillo said that Elizondo was a male in order for the license to be processed successfully. When Elizondo was born, there was a clerical error on her birth certificate that falsely categorized her as male; due to this loophole, Castillo was able to legitimize the marriage in the system. However, when Costa Rican authorities caught wind of the falsification, they suspended Castillo from practicing law for thirteen years and annulled the marriage.

Despite the complicated path that has led to today’s progress, Costa Rica is one of just 35 nations in the world that have legally recognized same-sex marriage. Not only that, but Costa Rica is the first country in Central America to make this progressive step, despite the Inter-American Court of Human Rights’ recommendation that all signatories of its American Convention on Human Rights legalize these unions. To break it down, Bolivia, Cuba, El Salvador, Guatemala, Honduras, Nicaragua, Panama, Paraguay, Peru and the Dominican Republic do not recognize same-sex marriage. In terms of all of Latin America, Argentina, Brazil, Colombia, and Uruguay have legalized gay marriage, and Mexico has done so in eighteen of its thirty-two states. While Chile and Ecuador recognize a same-sex civil union, they do not acknowledge it as marriage.

A possible explanation for most of Central America’s hesitance to legalize same-sex marriage is that the region is characterized by deeply entrenched adherence to religious beliefs, namely staunch Catholicism. With that said, over 425 million Catholics live in Latin America; 84% of the Latin American population reports being raised Catholic and 69% reports remaining Catholic as an adult. Protestantism is the second most practiced religion in Latin America with 19% of the population reporting that it is Protestant. All in all, a total of 88% of Latin America holds beliefs derived from Christianity. Although not all Catholics are homophobic or oppose same-sex unions, many do not condone homosexuality because the Bible promotes heterosexual unions as ideal. These fundamental Catholic views are also related to other delays in women’s rights in the region, in connection to birth control and a woman’s right to choose.

“Daritza and I believe that the main obstacle that we had to overcome, and that continues to be an obstacle even today, is Daritza’s family. This is because, from the beginning, her family has refused to accept her sexuality, and deep down they hoped that she would become heterosexual and marry a man. When Dari’s mother found out that we were going to get married, she asked her not to upload photos of ‘that’ on social networks and to please do it for her, but Dari told her that this request was impossible. Everyone else shares their happy moments on social media, and Dari also had the right to do it too. Despite all the emotion of the wedding and the happiness that it entailed, Dari also felt a little sad due to the lack of support from her family.”

“Although my mother loves her as if Dari were her own daughter, the lack of acceptance from her own family hurts. We hope that in the future that will change and that acceptance will not just occur in Costa Rica’s capital, but also throughout the rest of the country.”

When I asked Quiros Castillo if Daritza’s mother’s prejudices were a result of religious beliefs, she replied,

“Yes, totally. She is very Catholic.”

However, as alluded to by Quiros-Castillo, certain areas of Costa Rica, such as its capital city of San José, have been more accepting of same-sex unions and have even been pushing for political and legal change. For example, Costa Rica’s current president, Carlos Alvarado Quesada, won the presidency in 2018 because the election was a referendum on the legalization of gay marriage. After the IACHR’s ruling, the 2018 election changed course and the legalization of same-sex marriages became a focal point. The country was divided politically; conservatives in rural towns wanted to elect someone who would resist the IACHR’s ruling while progressives in urban areas favored a president who would create legislation to solidify it. Similarly, the two main candidates, Alvarado Quesada and Welmer Ramos, mirrored public sentiment with Alvarado-Quesada taking the pro-LGBTQ stance and Ramos painting himself as conservative and religious. The election was so close that it went to a run-off, the third run-off in Costa Rican history. In the end, Alvarado Quesada won the election with 60% of the vote because he promised to advocate for the LGBTQ community and protect their rights.

Often times, legal change precedes social change; nevertheless, Costa Rica’s legalization of same-sex marriages is a good first step toward a more egalitarian, human rights conscious society. This divisive issue, as evidenced in this article, has caused ideological rifts in family units, instead of closeness through love and acceptance. In such ideological stand-offs, no one wins. Hopefully, over time, society will adjust to this new development and learn to embrace and accept people different from themselves. If a presidential candidate like Carlos Alvarado Quesada can have the courage to stake his campaign on such a polarizing issue and risk losing the presidency because of his stance, then perhaps society at large can choose to be brave, too. 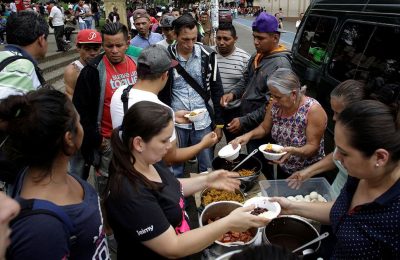