A stroll down 14th Street NW in the Columbia Heights neighborhood of Washington, D.C., greets visitors and residents with a melody of aromatic smells, colorful sights, and the energizing noises of the lively locale. Vendors line the street with a vast array of wares and food for sale — handmade paintings and jewelry, clothing items, fragrant perfumes, fresh watermelon and mangoes, steaming cups of atol de elote, and dozens of pastelitos. These vendors can be found laughing, gossiping, and making sales in the heat, the cold, the rain, and the snow, and they have become an integral part of street life in the Columbia Heights neighborhood.

Street vendors began to crop up around the District in the 1990s after hundreds of thousands of Salvadorans fled the violence of the civil war in their country, which lasted from 1979 to 1992. These immigrants, including undocumented people, often struggled to find work because they faced discrimination during their job searches and were exploited by employers due to their immigration status. Therefore, they relied on starting their own microenterprises in order to provide for their families. Street vending also became an attractive option for formerly incarcerated individuals and individuals with demanding family obligations. This self-reliance reflects the spirit of entrepreneurship present in minority and immigrant communities across the country.

When street vendors first appeared in the District, they enjoyed the benevolence of the Metropolitan Police Department. The local police officers would chat with the vendors and even purchase wares from them. This relationship has tensed over the years, however, as the street vending business has dramatically grown. Most of the street vendors lack the required licenses for their businesses from the D.C. Department of Consumer and Regulatory Affairs, so their work has largely operated outside the legal system. The increased enforcement efforts of MPD mean these officers confiscate carts, throw away wares, impose exorbitant fines, and sometimes handcuff and detain street vendors. Colochita, for example, a 62-year-old street vendor, has been detained by MPD four times. These encounters have often devolved into severe violence.

15-year-old Genesis Lemus was selling plantain chips and atol de elote with her younger brother on a chilly November afternoon last year. Her mother was completing errands at home and planned to meet the children on 14th Street NW afterward. During that interval, however, MPD officers confronted Genesis; they told her that she could not sell her wares on the street because she lacked a license and was a minor. The police officers began to ask Genesis questions about her mother, which she refused to answer, and threatened to call the Department of Children and Family Services. An officer grabbed her brother during the questioning and, when Genesis tried to intervene to free him, a struggle ensued that led to another officer pushing her to the ground and injuring her knee.

After this violent incident, Genesis spoke about her experience at a news conference: “This situation, it terrified me. All I ask is for them to leave us alone, for them to stop treating us like criminals. We are not criminals. We do not go and steal and be in gangs. We go out and sell tacos, chips, mangoes to make a living for ourselves. I do that to help my mother out.”

Although MPD officers simply claim to enforce the law, many obstacles prevent street vendors from obtaining the required licenses to sell their wares legally. The licensing requirements compel vendors to prepare their food in commercially licensed kitchens, and their carts must adhere to specific regulations such as including an attached sink. These licenses can also cost over $1,600, which many vendors simply cannot afford. Even if vendors acquire the resources necessary to meet the licensing requirements, 14th and Irving Streets — the most popular areas for street vendors — no longer have eligible sidewalk spaces left per the designations of the D.C. Department of Transportation. This entire process to obtain licenses is further exacerbated by many immigrant vendors’ limited English proficiency, which renders it difficult to learn about and navigate the complex licensing system.

Since her election to office in 2015, Ward 1 D.C. Councilmember Brianne Nadeau has largely led the fight to help street vendors overcome these obstacles and to improve relations between vendors and the police. She has worked with local organizations in D.C. to develop a program for street vendors that provides them with training and grants to meet the DCRA’s standards. This past July, Nadeau introduced the Street Vending Decriminalization Amendment Act of 2020, along with six other council members, to decriminalize unlicensed street vending in D.C.; it would still remain a civil infraction, but unlicensed vending would no longer result in criminal penalties and, by extension, would deter police confrontations with vendors.

After this bill was referred to committee, Nadeau also introduced the Sidewalk Vending Zones Amendment Act of 2020, along with two other councilmembers, in October to formalize the street vending economy and establish new designated zones for street vendors to operate. This bill would also create two different licenses for these vendors, according to NPR: “The first would be for a single sidewalk vendor, while the second is geared toward organizations and cooperatives vendors can register with to access the sidewalk vending zones.” A vote is expected on both these bills later this year, and their passage will represent a tremendous victory for street vendors in the District.

Nadeau points to the gentrification of Ward 1 as the fundamental issue for street vendors. “When we hear these stories about people calling the police on street vendors, we do have to be a little more introspective and ask ourselves, ‘Why is it happening?’” she said in an interview with The DC Line.

Amid the rapid gentrification of Columbia Heights, new residents have begun to displace the vibrant street life of the neighborhood. Street vendors, however, are an integral part of the neighborhood’s identity, and they have served the community for decades. They often act as the eyes and ears on the street to deter and discourage crime. These vendors know their blocks like the back of their hands. They know the regular people. They know the regular activity. They can easily recognize suspicious movements. In 2010, for example, two street vendors in Times Square noticed a vehicle unusually parked near their carts; they reported the suspicious vehicle to nearby police officers, who realized it contained explosives inside. These street vendors rightfully became national heroes for uncovering an attempted car bomb attack that would have severely harmed many people. Street vendors all across the country contribute to their communities in similar, though admittedly more subtle, ways.

Street vendors in D.C. also promote the health of their communities. They provide their customers with nutritious food options that have strong cultural connections, rather than unhealthy meals and snacks; children can purchase and eat fresh and affordable esquites from these vendors and, in turn, learn about its Mexican heritage.

At the start of the COVID-19 pandemic in early March, street vendors in the District became community health ambassadors. Fear of the coronavirus quickly struck D.C., and the city turned toward street vendors to serve on the frontlines. Public health clinics in the area began to work with these vendors, training them to provide hand sanitizer and health information to passersby on the street rather than their usual wares. For their efforts, the vendors received a stipend to recompense them for their lost wages. The city recognized the importance of street vendors within their communities and harnessed this asset to limit the spread of the virus.

By the end of the month, however, the District issued a formal stay-at-home order; the street vendors’ public health outreach came to an abrupt end and, by extension, their main source of income. The informal nature of their work and their undocumented immigration status also excludes most street vendors from access to government assistance, such as business assistance and unemployment insurance, at both local and federal levels. The outbreak of the pandemic, therefore, has severely harmed these vulnerable workers and rendered them unable to fulfill their basic needs — rent, food, medicine, etc.

“We are asking that the D.C. government doesn’t leave us in the cold because we are people, too. We are just people who don’t have papers. We work. We pay our bills. We pay our taxes. We follow the laws,” Enrique Arias, a street vendor in Columbia Heights, said in an interview with the Washington City Paper.

Many street vendors have turned to mutual aid networks in D.C. to provide assistance during this unprecedented time. The Vendedores Unidos Unemployment Mutual Aid Fund, for example, distributes Visa gift cards and food donations to street vendors. This mutual aid fund is largely supported by Many Languages One Voice, a nonprofit organization that advocates for the immigrant community in the District. Despite this organization’s tireless efforts, however, street vendors continue to struggle to provide for themselves and their families in the midst of the pandemic.

The future for street vendors remains uncertain. The fight to support these hardworking members of the D.C. community, however, should not end. Many Languages One Voice continues to support vendors in the District. It advocates for affordable permits that are accessible across different languages, policies that guarantee the presence of vendors at all negotiations and discussions with DCRA concerning street vending, and restitution for incidents of police harassment.

These reforms to the street vending economy will undoubtedly allow an integral part of our urban communities to flourish. Even though many street vendors in the District may operate unlawfully, we must still treat them with respect and dignity. We must understand the complexities of their situation. We must work together to help them operate within the legal system, rather than erect more barriers and regulations. These vendors stand on the street for hours each day to survive – to support themselves, their families, and their communities. It is time that we recognize and embrace them as essential members of society. 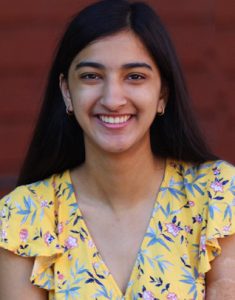 Aditi is a rising junior at Georgetown University. As an Economics major with minors in Government and Justice & Peace Studies, she has always been interested in the economic and political determinants of global migration. Aditi has participated in and led a university-sponsored immersion program to Tucson, Arizona and Nogales, Mexico that has allowed her to directly explore the complexities of Latinx migration and understand the realities of immigrant life at the United States’ southern border. This experience has driven her passion to advocate for the migrant justice movement and support efforts that provide humanitarian assistance to migrants. Aditi hopes that her work as an Immigration Writer will amplify the voices of immigrants who are often neglected in national conversations and, ultimately, create actionable change.