This village of the Santa Isabel district located in the province of Colón is home to hardworking people, pristine landscapes and customs that have been preserved over time

On our way to Nombre de Dios, a car trip took us to cross the Panamá-Colón highway until we reached Sabanitas, then we continued towards Portobelo; however, we still had some way to go, but the breeze, the view of the landscapes made the trip enjoyable and it was certainly worth every minute on the road.

At the entrance of Nombre de Dios in the district of Santa Isabel, you can see on the left the police station, where agents work to maintain security at the site and on the right is the cemetery where the remains of the locals rest.

From a distance you can contemplate the sea that, amid the scorching sun, invites you to enjoy its refreshing waters. In the rest of the way you can see the colorful houses, a small park and grocery stores. You can also see the mountains where crystalline rivers and a variety of animal species are located.

Going deeper into the historical context, we can highlight that Nombre de Dios was one of the first European settlements in America, considering itself the oldest population founded in continental America by Europeans. Until 2010, the town had 1,130 inhabitants. According to historical data, this space was explored in 1502 by Christopher Columbus, on his fourth voyage, who called it the port of Bastimentos.

Upon our arrival we had the opportunity to talk with Miguel Pimentel, 54, who tells us that he arrived in Nombre de Dios with his family in 1975. His father traveled to this place after leaving the lands of the Bayano River – they were evicted due to the construction of the dam that was carried out in the area- Pimentel still remembers that access to the historic town was difficult since at that time you could only get there by boat that left from La Guaira, there was also a dirt road that started from Portobelo to Nombre de Dios, but the journey could only be traveled on horseback or undertake a long walk that took more than three hours.

“When we got to that village, the inhabitants of that town lived in settlements, they were groups of Afro-descendants, their subsistence activity was fishing and selling coconut,” he recalls, “they exchanged with Colombians who came to the coast by boat They exchanged coconuts for merchandise such as clothing, food and other utensils.”

Since the road was made of dirt it was difficult to access the place, however, in 1977 the authorities began to build the asphalt road with the purpose of improving communication and bettering the flow of commercial movements to Nombre de Dios, and other more distant towns like Palenque and Viento Frío.

“At the beginning the stores were scarce, there were only two kiosks with few products, but that changed over the years when people were occupying the different spaces and building their houses.”

Continuing with his story, Pimentel shares that his father was the first rancher to arrive in Nombre de Dios and he bought land with which he began to plant rice, corn, yucca, banana and other crops.

“After sowing, my father brought cattle to his farm,” and soon the cattle ranching activity began fully. “My family sold milk and cheese. The meats were given on credit and little by little they were supplying those meat products to the inhabitants, this food was scarce before our arrival.”

One reality is that life in the countryside is not easy and proof of this is the limited access to basic health and education services. Miguel’s childhood was not free from these scourges, and his childhood was marked by hard work, with only 7 years he already knew how to plow the land and look for firewood.

“Each one had an assigned task, my mother, my father and my brothers, we all went to the mountains to work. I remember if he went to school twice a week it was too much. For my dad the priority was work and not school.”

Thus the years passed until Pimentel grew up in the midst of the work in the field and his academic training that he had in the school of his town called José Isabel Herrera, where he attended up to fifth grade.

“When my sick father took over the land, my brothers stopped working in agriculture, so I was the one who worked the pastures to keep them clean and in good condition.”

After staying for many years in Nombre de Dios, Miguel later settled in the city, where he worked for many years applying his knowledge in various areas. Currently, he lives with his family in Don Bosco in the area of Panamá Este.

In Nombre de Dios as part of the celebration of Ash Wednesday and Carnival, the inhabitants of Colón perform traditional dances and games of “Diablos y Congos,” which have been suspended as a result of the pandemic caused by COVID-19.

A question that many ask is where did this tradition come from? This ritual is known as the “baptism of the devils.” Within the Congo culture, which was declared an intangible heritage of humanity, by the United Nations Educational, Scientific and Cultural Organization (UNESCO), the ritual frames the experiences of mistreatment suffered by African slaves during colonial times by the Spanish, represented in this performance, as devils.

Today, the Dance of the Devil Congo represents the constant struggle of Africans who in the past struggled to free themselves from the yoke of the Spanish.

This event starts from Monday to Tuesday. The residents dressed in Congo clothes begin to sing their songs and melodies, as a prelude. On Tuesday night some participants of the activity go out to the town wearing their devil costumes, but the next day marks the start the holiday. On Wednesday afternoon all the devils come out and group together with the people dressed as Congos.

“Of all those who participate, there is one who is called the‘ greater devil ’who is the one who comes out almost at the end of the act and unlike the others, he wears a completely black dress and does not include the red tone in his costume. He is chosen because of his age within this tradition or because of the size of the mask,” explains Omar Muñoz, 20, who has participated in this cultural event since his teens.

Part of this tradition contemplates that at the end of Ash Wednesday, the Congos called “angels” perform a dramatization where they tie the devils with a rope, sprinkle holy water on them, and remove the devils’ masks.

“This was a custom that was done more frequently before, but little by little it has been lost. Now what is done is that the devil who wants to participate shows up and then removes his mask. Before, they did not take off the mask in front of the public; however, some things have been changing,” he says.

Regarding the wardrobe, Muñoz points out that he disguises himself as a devil, where he wears a mask, a clothing generally black or red that covers his entire body, and on his feet he wears boots with bells. In his hand, he holds a whip (representing the object used by the Spanish to punish slaves).

“Before the masks were made of clay, they were much heavier and suffocating since we used them in broad daylight. Then they were made with cardboard, rubber and paper, forming a kind of paste that made the material of the mask resistant, they added fabrics that was used to make the costumes,” he explains.

After this compendium of stories we can conclude that this district has a great cultural and natural wealth.

Today, its inhabitants are waiting for better opportunities in terms of education and improvements in medical care.

The inhabitants of Nombre de Dios, despite the deficiencies, keep alive the hope of being placed on the tourist promotion map to attract more travelers and thus be able to promote their region and diversify their economy that today is driven mostly for agriculture, fishing and livestock. 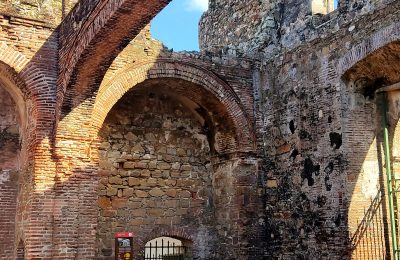 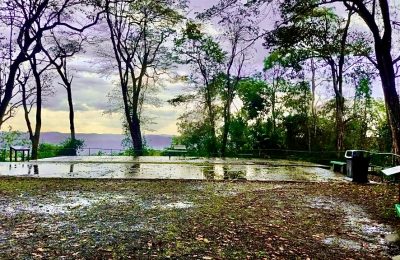