On Thursday, February 18 2021, Representative Linda Sanchez and Senator Bob Menendez introduced the U.S. Citizenship Act of 2021 (USCA) which lays out broad reforms to our immigration system and provides new pathways to status for millions of immigrants. The bill also sets standards for the inhumane and unconstitutional conditions seen at Border Patrol facilities, codifies humanizing language by eliminating the term “alien” and replacing it with the term “noncitizen,” and includes a $4 billion plan to address the root causes of migration. Passing the legislation would require the support of many Republicans to reach the 60-vote threshold needed in the Senate.

The bill would create sweeping changes that would benefit Dreamers, farm workers and TPS recipients by speeding a pathway to citizenship. Critics of the bill argue that it does not go far enough in areas such as funding to assist Central American countries and racing immigration caps. If it passes, the Biden administration will need to come up with a new approach to the root causes prompting thousands to flee to the U.S from Central America in particular. Lack of women’s rights protections, corrupt governance and organized crime patterns in the Central American region remain pervasive problems that will require new solutions and effective alliances.

TITLE I—EARNED PATH TO CITIZENSHIP AND OTHER REFORMS

This bill establishes a new status for those pursuing citizenship called lawful prospective immigrants (LPI). Under this status, immigrants who meet the requirements would be able to renew this status every 6 years as long as the requirements continue to be met. Those with LPI status can become lawful permanent residents if they pass background checks, have been an LPI for no less than five years, have not left the United States for more than 180 consecutive days unless unauthorized or beyond one’s control, and have satisfied any Federal tax liabilities.

The LPI status creates an expedited pathway to citizenship for DREAMers, agricultural workers, those with Deferred Action for Childhood Arrival (DACA), temporary protected status (TPS), Deferred Enforcement Departure (DED), and many who are considered essential workers. The LPI status is also open to those who were removed from the U.S. or deported under Trump if they were here for 3 years prior to leaving and did not commit 3 misdemeanors or were convicted of a felony. The bill also includes some criminal immigration reforms, such as  redefining “conviction” to disregard expunged convictions.

Biden’s immigration reforms include a $4 billion four-year interagency plan to address the root causes of migration. It includes increasing assistance to El Salvador, Guatemala, and Honduras. This funding is aimed to address the key factors contributing to the flight of families, unaccompanied noncitizen children, and other individuals from Central America. Key factors include but are not limited to: combating corruption, promoting human rights and fundamental freedoms, addressing poverty and inequalities, and preventing endemic levels of sexual, gender-based, and domestic violence.

The bill establishes designated refugee processing centers throughout Central America to register and process displaced persons to relocate to the U.S. or other countries. This immigration reform has authorized additional funding for DHS to increase the use of smart technology and surveillance along the U.S.-Mexico border. This funding will expedite screening, enhance identification of narcotics and contraband, as well as provide more training for Border Patrol agents and create a Border Community Stakeholder Advisory Committee.

Included in this, the DHS Office of Inspector General is directed to conduct oversight to ensure (1) the effective and legitimate use of technology; (2) guidelines are developed to ensure appropriate limits on data collection, processing, sharing, and retention; and (3) has consulted its stakeholders, including neighboring communities, in its plans to expand technology use. The bill also includes standards of care for those held in CBP custody, including treatment of children and prohibiting the removal of a child from a parent or legal guardian.

This section shows many provisions that aim to increase family-based immigration. It increases the number of family and employment-based visas, per country caps, and clears backlogs. The bill includes the reclassification of spouses and minors of lawful residents as immediate relatives, allows same-sex couples to sponsor their partner, and repeals all of the presence bars.

The reforms involve amending the Immigration and Nationality Act by protecting same-sex permanent partners and children. It also includes the NO BAN Act which prohibits religion-based discrimination and increases Diversity Visas from 55,000 to 80,000. In an effort to promote integration and inclusion for immigrants and refugees, funds have increased for a number of programs. These include English-language classes, immigration councils, educational programs for academic development and occupational skills, and the development of outreach materials to help immigrants to apply for lawful immigration status.

Criminal-immigration reforms in this section make important changes to conviction-related determinations by altering the definition to no longer include convictions that have been dismissed, expunged, or when diversion programs have been completed. Petty offense exceptions are increased to two crimes, rather than one.

This bill calls for expanding alternatives to detention, expanding training for immigration judges, and requires providing counsel for children and vulnerable noncitizens, including counsel inside immigration detention facilities and border facilities. Other provisions include eliminating the one-year deadline for asylum claims, increasing the number of U visas, and increasing access to employment authorization for those seeking asylum.

This section’s key provisions create stronger protections for immigrant workers and remove barriers to worker organizing and employer accountability. The POWER (Protect Our Workers From Exploitation and Retaliation) Act provides expanded eligibility for U visas, which gives lawful status up to four years, to workers who are victims of abuses from employers, protects workers who file workplace claims, and gives some protection to those who are detained in worksite raids and retaliatory tips when deemed legitimate.

Also notable are farmworker expanded protections including the right to overtime pay and new criminal penalties for employers who violate provisions under the Migrant and Seasonal Agricultural Worker Protection Act (MSAWPA). The act has additionally created new civil penalties for employers if they violate local labor or anti-discrimination laws in regard to undocumented workers.

Concerns on the U.S. Citizenship Act of 2021

There are clearly many new reforms that help many immigrants seeking to come to the United States. However, certain provisions worry advocates as fundamental issues affecting immigration are not addressed.

To start, the U visa cap immediately fills as we hit the new fiscal clock. While lifting the U visas cap to 30,000 is better than before, many organizations have been pressing for a higher number or no cap at all. While the cap is in place, we see visa distribution being determined by timing, not need.

Some provisions raise concerns in regards to those who are recently legalizing their immigration, as it restricts them to health and economic support during their years in LPI status. More specifically, they are not eligible for these benefits, such as Affordable Care Act tax credits, during the years of LPI status.

In regards to criminal immigration reform, those who are victim to the racial disparities in policing are not protected and can find themselves ineligible for LPI status. As we know, these disparities target minority groups that otherwise would not be subject to extra and discriminatory scrutiny that could result in unfair convictions. Title II has authorized DHS to buy new “smart” technology that could potentially be used for harmful immigration purposes.

Considering the set guidelines do not consider tendencies toward racial profiling, this technology will likely perpetuate domestic enforcement based on the premise of immigrants being criminals. And although there are new standards set for enforcement at Border Patrol facilities, the facilities themselves continue to raise concerns of ethicality.

There is too much of a cost for those who are often seeking a better life; legal fees, application fees, and many other aspects that perpetuate the criminalization of immigrants. Especially during times of the COVID crisis and environmental disasters that have dismantled already fragile economies.

This bill does not include specific demands for women’s rights in countries that will receive funding. Many women are fleeing their countries because of issues like unpunished femicides, domestic violence, little opportunities, and lack of health care access- all of which need to be focused on alongside funding economies. While we do see some attention on the root causes of migration, some say full reforms require an understanding of the effects of US imperial interventions and the impacts of free trade policies, such as NAFTA. Our system is largely a result of the United States’ imperialism, violence, and specifically labor exploitation, which all need to be addressed for true justice.

This bill might have taken some steps towards reform, but does not include a paradigm shift in immigration and root causes. The Brooking Institute believes that Biden’s strategy for more funding might have an impact on the judiciary and create groundwork for subsequent economic progress, but they admit,

“It is unrealistic to expect that even a well-managed $4 billion investment would transform the economies of the region sufficiently to stem incentives to migrate within a few years.”

And further, previous investments in Central America minimally addressed the diversion of aid by corrupt officials, benefiting U.S. contractors, while leading to few benefits for the most needed populations. Decades-old political problems will require new solutions.

Biden will have to negotiate with regional leaders and work alongside local, bi-regional, reputable NGOs to push for better enforcement of policies that protect women and families, and curtail the influence of corrupt governance. A regional commission might be met with resistance, but could help with ensuring the money is spent towards their intended goals. While the U.S. Citizenship Act of 2021 is a step in the right direction, its success in tackling the root causes of migration and creating a humane and just border remains largely undetermined. 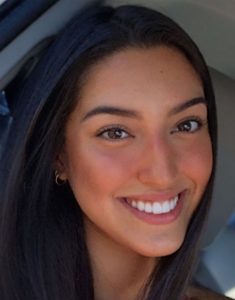 Mitra Aflatooni | Washington State University
Mitra is a junior studying Political Science with a minor in Sociology at Washington State University. She was raised by a Latina mother and an Iranian-American father. Through her family’s experiences, she has seen the hardships of immigrants from all walks of life. Wanting to create progressive social change, she is pursuing a Master’s in Public Policy after her undergrad. She strongly believes that grassroots movements that amplify marginalized voices and push for policy change will be the foundation to a more just, equal world. She is passionate about social change and understanding how to better uplift the Latinx communities.