Migration Colombia recently reported that more than a million Venezuelans scheduled appointments for the second of three phases of the Temporary Protection Statute (ETP) that began September 1st. They will first go through a phase called “Biometric- Digital Identity” which consists of fingerprints, photographs, and other biometric data that will allow them to have the immigrant’s identification, this being the first resource of the ETP.

The first phase of the Temporary Protection Institute began on the 5th of May where President Duque made the announcement. Venezuelans who benefited from this mandate represent 56% of the 1.7 million who arrived in the country fleeing the severe crisis. The United Nations estimated that 34% of the five million Venezuelans who have left their country are now in Colombia.

The identification document given at the second phase of ETP will be delivered to the Venezuelan people and will hold a variety of security measures to facilitate their incorporation into more of a productive lifestyle in Colombia. The identification document will be mandatory for Venezuelan migrants older than 7 years old, who desire to make use of the Temporary Protection Statute (ETP) and have already completed the first phase of the ETP. More than 1,233.3000 people registered to benefit from the Temporary Statute for the Protection of Venezuelan migrants, a few hours after the deadline.

In addition, in less than three days before the start of the second phase of the Temporary Protection Statute, more than a million Venezuelan citizens scheduled their appointments for biometric registration (Biometric ID).

It is also expected that in the next couple of days, more than 200 thousand who have been moving forward with their registration will also schedule appointments for their biometric registration. The Colombian immigration authorities have a challenge on their hands since their goal is to fully identify 800,000 Venezuelan migrants before the end of 2021.

“We want to reiterate the infinite consideration for the vast majority of Venezuelan migrants, good people, resilient people, who have been moving forward in the country,” said Juan Francisco Espinosa Palacios, director of Migration Colombia after a working session with President Iván Duque.

The departments that have received a great number of Venezuelans to begin their Temporary Protection Statute are Cundinamarca, Bogota, Antioquia, Valle del Cauca, Norte de Santander, and Atlantico. Venezuelans living in Antioquia and Valle del Cauca are the most registered for their Biometric- Digital Identity appointment, reaching above 90%.  Venezuela migrants living in departments of Vaupés, San Andrés, Sucre, Guainía, La Guajira, Arauca, Nariño, Santander, Casanare, Magdalena and Bolivar,  are the least registered to be part of the Temporary Protection Statute.

To know where exactly the Biometric Registry will be located, the Venezuelan citizen will be able to have access the Migration Colombia web page, www.migracioncolombia.gov.co, and press the “visible” option where they will be able to register for an appointment at “consult appointment.”

In this process, you will use the type and number of documents used to make your registration. The Colombian immigration authority will be following up with an email to users, with the date, time and place, where the appointment will be met. The users will receive the email a few days in advance of the appointment date.

The new campaign Migration Colombia has launched is called “HazteVisible”, bringing visibility to the existence of Venezuelan migrants in the country. Stating that these individuals deserve part in Colombian society as productive members and accepting them into Colombian life.

“Being generous is not giving what we have left over, it is sharing what little we have so that together we can move forward” -Migracion Colombia.

Migration Colombia streamed live on September 1st with Director Juan Francisco Espinosa Palacios to share details about the second phase of the ETP.

“Today is an absolutely happy day, we have been working many days, many short nights, and many hours spent on the team to get you on track on this first day of September,” said the Director of Migration Colombia Juan Francisco Espinosa. The Director continued:

“Today begins the second phase of the Temporary Protection Statute (ETP). Today the statue dresses blue, and it wears blue because remember that the entire Temporary Statute is inspired by our national color.”

The first phase of the ETP was yellow, and it continues to stay that way. Now it is blue to represent biometrics, technology, and novation. The colors of the ETP phases represent the Colombian flag, as it obtains yellow, blue, and red.

The stages haven’t ended, they continue and will keep proceeding to help the Venezuelan migrants in need of recognition, to be “Visibles” (visible). In the end, the Venezuelan citizens who adhere to all three phases and follow requirements will secure their Permit for Temporary Protection, which will allow them to be in Colombia for up to 10 years. 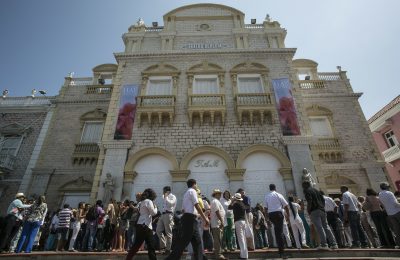