Advocacy through storytelling is one thing Latina Republic knows very well, but we aren’t the only publication focused on bringing underreported stories to the public eye. Meena Venkataramanan and Vivekae Kim, the co-founders of Stories from the Border (SFTB), created a platform in 2019 for that exact purpose. They source stories from the general public; anyone with a connection to the border, immigration, or a story they want to tell can pitch to the publication during their open-call submission searches and receive support from their editorial staff to turn their idea into a fully-fledged article.

SFTB was born out of a summer internship in 2019, when both Kim and Venkataramanan received funding from the Harvard Alumni Association of Arizona to come to the state and write about how immigration exists in the region. What started as two solo projects merged into one once the two students realized they had both pitched similar projects to the Alumni Association board.

They launched a publication on Medium to publish their own stories, where they quickly grew a social media following. Once the summer was over, Kim and Venkataramanan decided to continue publishing stories on the platform by opening up the platform to other contributors. As Kim said,

“Being there really made it clear that Meena and I had an obligation to tell those stories and an obligation to the people we met to bring their long legacies of organizing and activism and service to a broader and wider audience… Once we came back to campus we were like, ‘there’s no way we want to stop doing this.’ I think we both felt like we forged connections in that region that have impacted us, have completely changed or kind of narrowed our trajectory in terms of what we want to do with our lives.”

Neither Kim nor Venkataramanan have Latinx heritage, so they make it a point to highlight the voices of those who do. This takes a plethora of different forms; from interviewing folks with indigenous and Latin American heritage to helping Latinx writers publish stories about their families and communities to highlighting the work of Latinx artists. SFTB is a place for all of these pieces and more. They even have a podcast series full of interviews with migrant rights activists, Latinx content creators, and more. As Kim said, they try to get “as close to the subject” as possible. She continues,

“As the journalist, or as the writer, as the editor, you’re never going to be the person doing the work that you’re trying to tell the story of… I think that a lot of our interest has been in making sure we’re talking to people who aren’t necessarily the dedicated spokespeople of an issue… Because there’s a lot that you’re going to lose about the day-to-day and the vividness of the experiences people face in doing the work that they do. So I think there’s always kind of a struggle to source well and do your due diligence in making sure that you are getting to the heart of the issue that wouldn’t be covered by major news outlets.”

Although there are certainly difficulties working on a smaller publication, the ability to write genuine pieces of investigative journalism that come from places of experience or curiosity as opposed to framing stories around a catchy title or with the intention of getting clicks is one of the biggest perks. In her eyes, that’s part of what makes Stories From the Border so special. Kim went on to explain that some of SFTB’s contacts even lamented the treatment they had received from larger publications, who saw deaths in the desert as a “summer story.”

“One thing that Meena and I encountered a lot when talking to people in Arizona, talking to folks in the Tohono O’odham nation, talking to people who have been doing this activist work for decades, is they had these profound, repeated experiences of people dropping in, reporters parachuting in, already expecting a certain kind of story to be told and then just trying to curate their interview questions such that they get the snappy quote and then they leave. There’s not an investment in what is the long history or what is the deep history of this issue…

It was only last summer that the New York Times magazine did a kind of feature length piece on it, about the Sonoran desert and the work of these humanitarian aid groups who are constantly trying to, in the wake of border enforcement, pick up the pieces and provide aid to people who are at risk of dying in that region.

I think that’s a great example of an issue where every summer there are certain reporters who will see this as a summer story. The temperatures go up, more people die, that’s what makes it a story. When what makes it a story is that it’s a story of profound state violence and the ways that bureaucracy distances people from the ways that immigration enforcement actually impacts peoples’ lives and produces deaths.”

While their publication got started along the border telling the stories of those living in the borderlands, SFTB has evolved into a platform for anyone who has been impacted by migration to share their experiences. This was especially prevalent during the COVID-19 pandemic, when travel was incredibly restricted and immigration opportunities were slim. Kim herself is from Chicago, so she has encouraged other folks who live far from the border to examine the way they see immigration in their own cities and lives. She said,

“I think in some ways it’s enabled people to look in their own backyard and be like, ‘well what is it about my hometown that’s been impacted by immigration?’ For people who are from places in the midwest, I know that people have been investigating what’s happening at meatpacking plants. There’s a lot of undocumented workers who are considered essential during the pandemic and are at risk of being the most severely impacted, some of the most severely impacted by COVID…

Immigration is an issue that is absolutely not confined to the region we would define or imagine as the borderlands, it’s within the interior spaces of every part of this country. Everyone is close to immigration whether they know it or not, everyone has somehow been impacted by human movement, and it’s just a question of are you willing or interested to investigate what that means in your daily life.”

That said, SFTB has not shied away from pointing out the harsh realities present at the border as a result of the pandemic. They released a very powerful piece last August about the impact of COVID-19 on folks detained at the Adelanto Detention center. Not only were incarcerated migrants unable to take proper precautions to prevent the spread of the virus in such confined spaces, they were subject to a near constant spray of chemical disinfectant.

“I think it is also kept in peoples’ minds the importance of remembering who is the most impacted by the pandemic and thinking of people who are in detention right now with no ability to social distance. And I think in some ways that has lent itself to the most damning exposes of what immigration detention really is, which is prison. It is incarceration. And by using the most conventional word for it; immigration detention, we’re often obfuscating it’s real function, which is to punish people who are in movement.

So I think, for example, the piece we wrote about the Adelanto ICE processing facility in California, that kind of constant use of disinfecting spray that detainees were experiencing health impacts from, I think it was one of those moments where you can kind of see more of what is unjust about the system.”

The Adelanto piece is one of the only articles that highlights the voices of detainees themselves rather than their advocates. As Kim explains, this is largely due to the difficulties in reaching detainees directly and the opacity of the immigration detention system. This is how she described the process of creating that article.

“The first step was identifying the fact that major news coverage of this issue was, interestingly, not centering the voices of detainees; it was centering the voices of legal advocates, kind of different advocacy organizations speaking on behalf of these detainees. The first step was identifying what groups those were and kind of going from there and saying, ‘well we also would love to find a way to talk to people detained.’ There’s a lot of purposeful barriers produced that are hard to navigate because the institution itself is just so opaque, and that’s kind of the goal of journalists is to understand how to better navigate those systems on behalf of readership who just want to understand and can’t call their local ICE detention center to find out what’s going on there; they depend on journalists to do that.

So from there it was just a question of getting in touch with those advocacy organizations and then, I know the writers of that piece…. were kind of on call after getting their phone numbers sent to detainees and left with detainees. They had to kind of just be on alert because when they received a call from numbers they didn’t recognize it was from a detainee calling outward because as far as I understand you can’t call directly into people… It was definitely a prolonged process because a couple of times detainees were calling at odd hours. It took a while to make sure that people were aligned at the same time and able to take the call so it was definitely difficult to reach people.”

With the extra effort put forward to produce the Adelanto piece and the others on the SFTB website, it’s easy to see why they’ve gained such a large social media following. Their multimedia approach to storytelling highlights the voices of “experts,” both those with valuable lived experiences and those with backgrounds in various border subjects. The practice of highlighting not only conventional scholarly opinions but those of people whose lives are the subject of study is one of the most important ways SFTB stays focused on their mission of getting as close to their subjects as possible.

You can find their podcast, Broadcasts from the Border, on Spotify, Apple Podcasts, and any other podcast platform. Their website and Medium page feature articles, interviews, photo essays, poems, and more. You can find them on Twitter, Facebook, and Instagram under @BorderStoriesAZ. 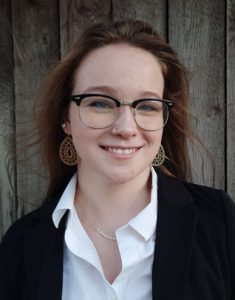