A major threat to the Brazilian Amazon in recent months has been the proposed reconstruction of the formerly abandoned Highway BR-319, which, at nearly 900 kilometers long, connects the state capitals of Porto Velho and Manaus. First constructed in the early 1970s and abandoned the following decade, the BR-319 highway is currently at the center of major controversies involving vast reconstruction initiatives in the Amazon, as licensing to recover the pavement in some of its stretches has been accelerated under the Bolsonaro administration.

The reconstruction of the BR-319 highway and associated roads would have disastrous consequences for Brazil, effectively rendering the remaining forest more vulnerable to exploitation. The recent proposal would allow a new paved road to be built atop the old dirt roadbed, exposing a major area in the Amazon to deforestation. So far, deforestation has been almost entirely limited to the “arc of deforestation” along the southern and eastern edges of the Amazon forest, as well as to the eastern half of the region, which has already gained road access.

Therefore, the highway, if reconstructed, would link one of the most conserved portions of the Amazon forest to the arc of deforestation on the southern edge of the region, of which most forest has already been destroyed. Thus, Brazil’s proposed reconstruction of the BR-319 in the southern Amazon region would accelerate deforestation in vast areas of the remaining forest. Furthemore, the paving of the highway and its planned side roads would give illegal loggers, squatters, and land grabbers access to nearly half of the county’s remaining Amazon forest, further weaving the vast area of previously untouched and unprotected rainforest between the BR-319 and the Peruvian border.

The lack of just and effective governance surrounding the issue is a critical factor in the battle over licensing the highway reconstruction project. At the present moment, the highway route is essentially a lawless area, demonstrated by the systematic building of illegal side roads connecting to BR-319 as well as the rampant exploitation of land. Furthemore, Brazil’s constitution requires an environmental impact study to be carried out prior to any potentially environmentally degrading activity or construction. Despite such guidelines and a court ruling establishing that environmental studies must be carried out for the section of the highway titled “Lot C,” Bolsonaro’s presidential office ignored the appeal to undergo environmental studies before paving. Thus, neither  environmental  studies  nor  consultation  with  indigenous peoples have been initiated.

The health of the Amazon rainforest is indispensable to the health of the planet as a whole, as it plays a key role in controlling both South America’s  rainfall and global climate. In terms of environmental services, the western region of the Amazon that would be affected by planned roads connecting to the BR-319 is vital to maintaining rainfall that supplies water to São Paulo and other major urban and agricultural areas. The rainforest biome is known for its rich biodiversity as well, which is threatened by ongoing, disruptive human activities in the area. Furthermore, the region is home to a wide diversity of  indigenous peoples, whose  right  to  free,  prior,  and  informed  consultation is being threatened by the reconstruction of the BR-319 highway.

The BR-319 Environmental Impact Assessment undoubtedly, then, has many flaws, including a blatant disregard for impacts beyond those directly adjacent to the highway. Furthemore, the history of infrastructure initiatives in the Brazilian Amazon is one of repeated violation of legal requirements,  especially those regarding indigenous consultation. Thus, due to the current lack of governance in the area and the indisputable history of deforestation in the Amazon, reconstructing the highway and surrounding roads would only accentuate the rate of human migration, illegal occupation, and deforestation in the region, which would, in turn, critically threaten the ecosystem services provided by the Amazon forest and the way of life of indigenous peoples.

Ultimately, reconstructing the BR-319 highway would have enormous impacts on the surrounding communities and ecosystems. Besides the requirement to comply with legal requirements, Brazil’s leaders must truly reconsider the wisdom of the endeavor itself, given the threat it poses to the country’s national interests, such as risking the loss of Amazonia’s environmental services. 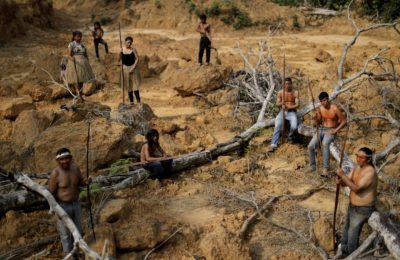