New York—An energized crowd waited behind the ceremonial ribbon that, once cut, would officially kick off the program of festivities lined up for the day. Troupes of Indigenous Mexican performers took center stage, one-by-one, in the parking lot of the First Baptist Church East Elmhurst in Queens, New York. Surrounding them were vendors who sold paintings, food, and artisanry—all items that represent their cultural identity.

“This is a culture that is alive. We are living culture! Recognize our culture, recognize our rights,” said Marco Castillo, co-founder of Red de Pueblos Transnacionales, or the Network of Transnational Peoples. (Here on out referred to as “the Network”.)

This is New Yorktlán, a daylong block party run yearly by the Network to celebrate Indigenous Mexican culture. To the average passerby, the festival is a lighthearted celebration buoyed by jovial dances and music. But for some of the participants, New Yorktlán is the means by which they get to see family members whom they left behind in Mexico after they migrated to the United States.

Such was the case for Claudia Guzmán, 31, who left her hometown of San Juan Epatlán, Puebla at the age of 15. “Over there everyone pairs up with a partner and has to find a way to survive,” she said. “For us, it meant coming to the United States.” Guzmán settled in East Harlem, where relatives of her husband already lived.

Both Guzmán and her sister left Mexico at the same time, and hadn’t told family members about their plans. It was particularly difficult for Guzman’s mom, Eva de la Era Tlapa, 58, who described the difficulty in losing two daughters at the same time.

On Oct. 8, however, Guzmán and Tlapa reunited after not seeing each other face-to-face for 15 years.

Even though Guzmán kept in contact with her mom and family members, they felt each other’s absence. “She suffered because I left and didn’t tell them anything,” said Guzmán. Tlapa and Guzmán held back tears as they sat next to each other shoulder-to-shoulder at the Network’s headquarters.

This time, they were gearing up to celebrate the second festivity of the season: Day of the Dead.

It’s celebrations like Day of the Dead and New Yorktlán that the Network uses as justification to sponsor visas for the relatives of their members.

They do so by taking advantage of nonimmigrant visas that are granted to temporary visitors for business and pleasure, known as B-1 and B-2 visas, respectively.

B-1 visa holders enter the U.S. to engage in commercial transactions not involving gainful employment. They must return to their country of origin—in this case, Mexico—after the specified period of time granted to them by the embassy or consular office—known as the validity period—elapses. If they fail to do so, they could face deportation, which would make applying for a visa in the future difficult.

The same goes for B-2 visa holders, except they enter the U.S. for pleasure, which U.S. immigration defines as “legitimate activities of a recreational character, including tourism, amusement, visits with friends or relatives, rest medical treatment, and activities of a fraternal, social, or service nature.”

The Network’s yearly festivities would logically fall under these two categories.

This year, the Network received nearly all of the visas that member’s relatives applied for—29 out of the 30 who applied were given a mix of B-1 and B-2 visas. “We didn’t expect this result,” said Yogui Ariza Bravo, board member of the Network.

Bravo, 39, migrated to New York City at 16 years old, and she’s lived in New York for 23 years. When she found out about the Network in 2016, what called her attention was their mission to rescue and preserve pre-Hispanic Indigenous culture and artisanry. Her own family are artisans who make clay figurines of pre-Hispanic deities.

Initially, Bravo’s involvement with the Network was limited. “Maybe I’ll go once a week, twice a week. Now I live here!” She heartily laughed. She left her full-time job to work with the Network. Aside from serving on the board of directors, she sells her and her family’s clay figurines at the Network’s storefront and headquarters in the Bronx.

Since stepping up to the Network’s leadership, Bravo has played a critical role in the process of family reunification. She runs the School for Peace, Health, and Justice, a month-long educational program which Network members interested in bringing over their family members are highly encouraged to attend. The School runs from late spring to early summer, offering classes ranging from embroidery to conflict resolution.

Aside from attending the school, family members must know something about their traditions which they can showcase at New Yorktlán or at Day of the Dead. “The basis for this process is culture,” said Bravo.

For Tlapa, this is her homemade alcohol in which two herbs—damiana and wormwood—are steeped and which she claims can cure gastrointestinal maladies like upset stomachs when ingested. Tlapa’s alcohol has earned her the title “El Aguardiente” among the people of her hometown.

Although the Network clinched a victory this year, Bravo doesn’t always remember the family reunification process being so successful. In 2019, the Network vied for 60 visas, of which 55 were rejected. Of Bravo’s own family, 10 applied for visas, and all were rejected. “It discouraged us,” she said.

Morale sank even lower as the pandemic swept the globe. “Covid-19 came and we thought, well, they’re not going to give us anything.” The circumstances discouraged both the Network’s leadership and their members. Since 2019, the Network hadn’t attempted the family reunification process.

Bravo’s own family felt the pangs of the pandemic and the U.S. immigration system, and this year they didn’t attempt to apply for any visas. “I want to start working with my community in Mexico more to help them regain their spirit because, well, this year they were very discouraged.”

Nevertheless, Bravo believes that Covid was a major turning point for the organization. She described with a sense of serendipity how the leadership’s impulse to help the community coincided with the need of the community and their members themselves. More Indigenous Mexican organizations joined the Network and showed interest in helping advance each other’s projects and ideas. Participation in the School for Peace, Health, and Justice jumped from 20 last year to 40 this year.

Certainly, it’s an era of good feelings for the Network and its members. Yogui described this year’s Day of the Dead celebration being more organized than last year’s, and New Yorktlán made a stride forward this year after being a demure celebration due to the pandemic. Additionally, this year they were able to secure the help of New York State Senator Jessica Ramos, who wrote letters in support of the Network’s efforts.

It would make sense that the Network, effervesced by their victory, would continue to celebrate for years to come.

Plus, some family members, like Tlapa, were able to secure a coveted 10-Year multiple entry visa. With this, she is able to legally enter the United States at any time within the validity period of her visa. When asked how she felt, Tlapa said, in her typically terse manner, “Thanks be to God.”

For Fani Luna, 41, and her mom Margarita Camelia Solís, 72, family reunification is euphoria. Both hail from Tecamachalco, Puebla and have endured 21 years of separation. “Thanks to this program, I’m able to see my daughters,” said Solís with tears in her eyes, her cane the only thing sustaining her frail body from collapsing from the emotion. Luna embraced her mom as tears welled in her eyes as well.

“At first I didn’t believe it. But afterwards, yes. I became happy,” Solís said when she saw her daughter for the first time in decades at the Network’s headquarters on Oct. 11.

This year was the first time, after three years of convincing from her daughter, that Solís decided she would try out the process and apply for a visa. Luna said, “I told her, ‘Mom, believe. Have faith. Let’s try it out. … You know how to embroider. It’s a treasure.”

Solís returns to Mexico on Nov. 16, but both are leaving with newfound hope. When asked about being separated from her family, Fani said, “It’s really difficult to lose so many moments with them, with extended family, but I know that soon we will be together.” 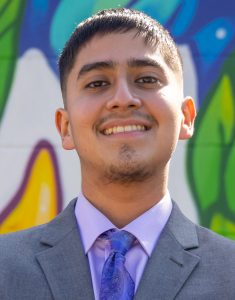 Alfredo Eladio Moreno is a writer, reporter, photographer, and historian from his hometown of Houston, Texas. His areas of interest include memory, healing, and identity, especially in Mexico and Central America. Previously, he has reported for Latina Republic on Covid-19 and LGBTQ+ rights in Nicaragua, and on the 2021 protests in Colombia. Currently, he is based in New York City. He is co-editor at Latin America News Dispatch, and a graduate student of Global Journalism & Latin American and Caribbean Studies at New York University.