In September 2020, biologists at the Roatan Marine Park (RMP) in Honduras detected an infectious disease in the Mesoamerican Barrier Reef. It has now infected at least 50% of the total coral reef system, the second-largest in the world extending across four countries.

The Roatan Marine Park is a nonprofit that co-manages the Bay Island’s marine ecosystem in a public-private relationship with the Honduran government, enforcing fishing regulations and conducting outreach with local communities. The Bay Islands National Marine Park has a total area of 647,152.49 hectares, larger than the state of Delaware.

Latina Republic spoke with RMP program manager Gabriela Ochoa, a marine biologist originally from Tegucigalpa, about the state of the coral reefs around Roatan and what’s being done to protect them.

What is the current condition of the coral reefs close to Roatan?

If you had asked me that question last year I would’ve told you that they were doing great. Our reefs are part of the Mesoamerican Reef System, which is the second largest in the world, extending between Mexico, Belize, Guatemala and Honduras. Last September we detected an infectious disease known as “Stony Coral Tissue Loss,” and since then the reef’s health has decreased with each month.

How does this disease work and what does it look like?

It was first detected in Florida in 2014, and since then it’s spread to 16 countries, Honduras being one of the most recent ones. It’s characterized, as its name suggests, by the rapid loss of tissue in the coral. What concerns us the most is this disease affects 24 different species of hard corals, some of which are in danger of extinction.

It can be passed from one species to another, and we think that it’s also moved by the marine currents. What worries us so much is the number of species. Even now [after 7 years] Florida still has sick corals. It looks like the coral skin is peeling off. Imagine getting a really bad sunburn; your skin peels off but in this case all that’s left is a completely white skeleton.

What types of treatments have been developed for the disease? Is it possible to cure?

We are applying antibiotics to the corals, which are made through a mixture of an ointment called Base2b that’s specifically designed for corals, it is mixed with amoxicillin and then it is applied directly to the affected coral.  In the field we have seen  an effectiveness percentage between 50 to 60%, depending on the species. But I always tell people that it’s almost like putting out a fire with a glass of water. It’s quite a lot of work, and it’s expensive. The ointment has to be shipped from the United States, we have to pay for fuel and boats.

My team spends almost 3 days a week working there. Right now we’re trying to pivot to coral nurseries on the land. By the end of the year we hope to create the first coral restoration center here in Roatan, where we’ll be able to move some of these colonies from the water to the laboratory and maintain their genetic diversity.

Then we can restore them in the future through a process called micro-fragmentation; basically a coral colony is divided into small pieces. When they are divided up the pieces grow faster and then those little pieces are put back into the sea. 5-10 are placed together and eventually grow into a larger colony.

Once the antibiotic treatment is applied is it possible for the corals to become reinfected?

Yes, it’s cured but it’s still quite probable that it could get hurt again, or the treatment could simply not work. It’s very difficult for us to treat all the corals – we don’t have the people or the money or the time.

Does this disease have anything to do with human activity, or is it completely unrelated?

Yes and no; we aren’t sure exactly what’s causing it. Scientists have been conducting studies and we know that it responds to antibiotics so it probably comes from a bacteria. Some scientists also think that it may have a viral origin.

But what all scientists from across the world agree about is that we’ve stressed our ecosystems to the breaking point; the effects of climate change and the contamination of residual water are definitely factors.

Many people in Honduras don’t know that here on Roatan we only have two water treatment plants and not everyone is connected to even those, so imagine all of the discharge of sewage into the water whenever we go to the toilet. Sun block [which negatively affects corals] is also a problem.

With Covid-19 for instance, if a person has diabetes or another underlying condition they’re more likely to get severely ill. The same is true for corals – if a coral doesn’t have adequate conditions to survive, then any illness can cause this type of underwater pandemic. So indirectly yes, I think that the disease does have to do with human activity.

So there’s no direct connection but it’s not something you can rule out either?

Is the restoration of the corals infected with the tissue loss disease related at all to your ongoing coral restoration projects?

No, we have a different project that we began two years ago. The corals that we’re restoring in nurseries in the water are called “elkhorn” and “staghorn” corals. They aren’t affected by the disease. We’re restoring them because they suffered from a different disease in the 80s. They’re the corals that form the reef’s crests; they protect us from tropical storms and hurricanes, they’re our first line of defense.

What are some of the animal species that depend on these coral reefs?

Basically everything. Think of the entire reef system like a tropical forest; they’re the home to some species, other species feed off of them. All of the commercial fish species depend on them, as well as sea turtles, sharks, and lobsters.

Have you seen a decrease in those species?

Before the disease the numbers of the commercial fish species had decreased dramatically according to HRI’s Report Card. It’s only been 10 month since we detected it, so it’s too soon to say for sure what the effects are.

In general, have you seen a negative impact from the development caused by tourism and the cruising industry on the island?

We are losing a lot of essential habitat, not just in the water but on land as well, because we’re developing without restrictions. In my opinion – and I don’t have the data to back this up – there’s too many people. The island does not have the right infrastructure, and the levels of tourists that we are expecting in the next few months. I’m not against tourism, I think that it’s necessary. I feel like we need to find that middle ground where we can develop sustainably.

When did you first start living in Roatan?

What was the island like in 2013? Was it less developed than it is now?

It’s kind of hard to compare, but I do think that the condition of the reef has decreased significantly in terms of the number of species that we’re seeing. However, many supporters tell us “I came four years ago and the reefs looked this way, and now I came back four years ago and there’s no fish.”

Then there are new divers that come and for them it might seem like a beautiful reef [because they have nothing to compare it to]. The science is showing us that the reef’s coral coverage is declining. Definitely with stony tissue loss we are going to see a dramatic decline in coral coverage. 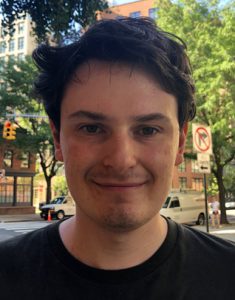